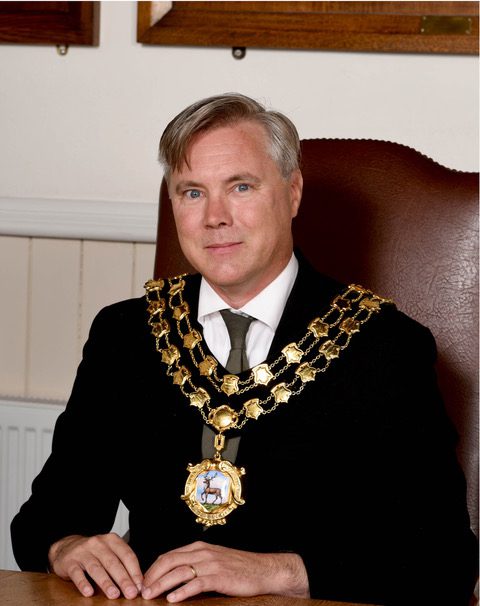 The Mayor is the first citizen of Tring and is elected to the post by fellow Councillors at Tring Town Council’s annual meeting in May. The role of Mayor is a non-political position and, during the mayoral year, a Mayor concentrates on the role of town’s first citizen.

The Mayor chairs Council meetings and attends many different types of function throughout Tring and the surrounding area. The Deputy Mayor represents the Mayor when necessary.

The Mayor’s role includes representing the Council at civic functions, receiving dignitaries, attending formal dinners, opening events, attending church services, talking to clubs and societies and visiting schools. On occasions the Mayor hosts visits from various groups/organisations. The Mayor’s Deputy (Nigel Nutkins in 2022-2023) can also stand in if the Mayor is not available.

When introducing the Mayor at your event, please introduce him as ‘Town Mayor of Tring, Councillor Christopher Townsend’.  The Mayor’s correct formal title is The Worshipful the Mayor of Tring Town. After formal introductions, speakers should refer to the Mayor as  ‘Mayor’.

The Mayor is delighted to receive invitations from local organisations to attend functions and fundraising events. The Mayor also represents Tring at functions outside the town. The Mayor occasionally entertains groups of young people from schools around Europe at the Council Chamber. If you would like to invite the Mayor to your function, please contact him through the Mayor’s Diary Secretary, via this link:  Mayor’s diary

If you have difficulty with this:

If the Mayor is unable to attend your event, you may wish to invite the Deputy Mayor (for the year 2022-2), Cllr Nigel Nutkins, to attend.